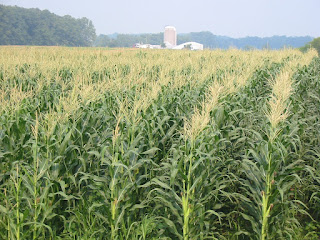 Looks like the corn harvest is in full swing around the Small-Hold now. I really did not see much soybean this year as almost everything was in corn. About July I did see a couple of small fields get cut for silage but very few in fact and I am guessing the turn in the weather we got at the end of July/first part of September saved a lot of the local corn. At least it appeared that way to me but I never really asked any of my neighbors because they were so busy I rarely saw them after July. Past experience tells me the harvest wasn't bad if I did not see them.

I am also getting inquiries for possible hay cutting for next year already. So it doesn't seem like any of the local farmers think that hay production is going to slow down any. I know even down south of us I am hearing rumors that smaller fields than ever are being argued over already. Some are calling em people's yard lol.

Kinda eliminating my qualms of selling out on my own hay production equipment. I need to be honest with myself there is no way I can cut, bale and store 400 square bales on my own any more even if I cannot hire someone to produce it for me I am not going to go out and do it myself any longer and it seems these days it's easier to find a custom hay guy than it is to find even one guy to help ya haul it anyway.

I still wrestle back and forth on it. If I pull the lever I will regret it and if I don't looking at that equipment just aging away in the shed will make me regret that too.

This year corn harvest has brought a new development into the mix though. Half mile long traffic jams that have never been seen out here before as these recent city residents move out here they have no idea how to manage driving around house sized combines and grain trucks using the narrow roads. Driving into the city to go to work this morning there was a traffic jam over half a mile long waiting to pull off from the North and head into the city blocked by a three combine crew moving to the next field. An awful lot of pissed off Karens being late for work all in a line.

Not gonna lie made me chuckle. I hope they hate it so bad they all friggin move....

I had another thought on my way in though. I wonder how much these motorcycle  snowflakes like spilled grain on the roads? Thinking about it made me smile too.

Posted by PioneerPreppy at 11:34 PM