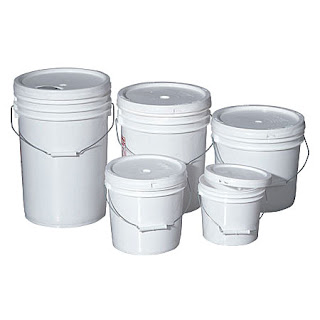 My thoughts on food storage have changed a bit over the course of this blog. For one I used to prefer 2 gallon pails to 5 gallon and at one time I placed more importance on wheat storage than I do now. The pails I use have been a problem getting down to the simple math of storing food. Typical store bought pails actually appear to be a bit more than an exact five gallons in overall volume, also the air displacement and moisture levels between various food types (say rice and beans) throws the calculations off... Ok not the calculations just the fact that I do not know the actual equations to use to accurately figure the holding capacity for each container and food type.

Another area I have changed my views, or at least my ability in, has been volume purchased. It may in fact be cheaper to purchase 50 pound bags of rice and/or beans or what have you at a time than smaller packages but when I first started prepping I was lucky to be able to afford an extra 4 pound bag of rice a pay period. Not to put too fine a point on it, although I can now afford large purchases and expensive gadgets, I still aim to publish my early "on the cheap" methods and support my roots as a single parent with a blood sucking Ex-wife. So while I may now go out and purchase two 50 pound bags of rice at a time my method is aimed at allowing those with limited funds to prep as cheaply as possible per outlay of cash not in overall amount.

Since I really like uniformity, after much trial and error I settled on a standard of 30 pounds of whatever food I am storing per 5 gallon pail with the one exception being pasta at 12 pounds per pail. This would include a mylar bag and oxygen/moisture absorbers, then sealing the bag and getting the lid on tightly. This "30 pound rule" as I call it works for me, your mileage may vary of course.

Tools and Materials - For my methods of storage you will need (aside from the food of course) five gallon food-safe plastic pails with lids. I prefer the lids with the gasket seal inside the rim but I have talked to others who suggest the simple plastic lids will work almost as well for almost as long. Mylar bags which can be ordered online from numerous sources along with oxygen and moisture absorbers. A rubber faced mallot, a steam iron and a piece of wood at least of 1"x2" size cut to a length of at least 18".

The Method - Basically for each type of food stored I wash the pail and lid and allow it to dry over night. I then place the mylar bag into the pail fitting it as uniformly to the sides of the pail as possible by opening it up while plugging in and allowing the iron to begin heating. I then add one of each absorbers to the bottom of the bag, pour in the contents to be stored and add in another of each absorber on top. Laying the board across the rim of the pail I then fold the bag over and push out as much air as possible and using the iron I seal the open end of the bag shut.

I recently came across a poster who was using a small vacuum cleaner to suck the air out of his mylar bags before the final closing. He simply left a small area unheated and stuck the flat attachment into the bag and sucked out most of the air. I have tried it and it works very well. He also used hand warmers as oxygen absorbers as he claims they are the same chemical makeup. One final point he also uses the cheaper bucket lids as he claims the buckets are for protection against water and rodents and not air tight. Seems logical to me so I have also begun using these methods in my food storage rotations.

This is a simple and easy method that may not keep the dried food viable as long as using dry ice, CO2, vacuum sealers or other methods nor do I claim it will. I can only attest that using this method I have stored rice, beans and wheat for a period of five years with no spoilage to date....knock on wood. I have used the dry ice method but my supply source died out a few years ago. Basically I use a simple, easy and cheap approach and plan on rotating out dried storage every 5 to 7 years. Again your mileage or preference may vary.

I worked out this method of storage when money was a real issue and I would purchase storage food in smaller amounts as "extras" while engaged in normal bi-weekly grocery shopping. It allowed me to spread the cost out and keep smaller amounts until I had enough to fill a pail. Not the most long term economical or "storenomical" (I made that word up) process but it was the best I could do at the time.

The Food - (This section is a work in progress I will be adding food types as I work up the calculations for them).

Using the information below you can calculate the amounts and servings of each food type you wish to store. My calculations per person will be published on a page later (IE: when I get around to it). Please note that no food listed below is a complete protein by itself, keep that in mind for emergency food storage.

Rice - One (1) cup of rice equals about 220 calories with approximately 2.5 cups per pound. Overall this would make a five gallon pail packed using the "30 pound rule" equal to 90 cups of rice or 19,800 calories per pail. One (1) cup being the individual serving size for rice. Of course this then gives us an average of 90 servings per pail or three (3) daily servings of 1 cup each for a standard month of 30 days or better yet... 1 pail per person per month.

Beans - One (1) cup of cooked beans equals anywhere from 215 (kidney) to 269 (mixed) calories with pinto beans yielding an average of 245 calories per cup.

Per the California Bean Board a one (1) pound package of dried beans contains approximately two (2) cups of dried beans and about five (5) to six (6) cups of cooked beans.

Therefore one half pound of dried beans would equal approximately one (1) cup dried and two and a half to three cups cooked beans. To further complicate this a serving size of beans is approximately one half cup cooked but for emergency situations I calculated beans at one half pound per person per day giving me roughly 612 to 735 calories per day and a storage ratio (again using the 30 pound rule) to one pail per person for every two months and an overall approximate calorie count of between 36,720 to 44,100 calories per pail. Ya I know a bit complicated but you get the idea.

Dried Peas (Split or whole) - These little darlings are a storage food I just recently started keeping. I wish I had thought of them before as pound per pound they are very beneficial and filled with wonderful vitamins and have some medicinal bonuses. See my post on dried peas for more info here.

One (1) cup of dried peas contains four (4) standard servings with 90 calories per serving. There are approximately 13 servings per pound. This would average out to 390 servings per pail (using the 30 pound rule) and around 35,100 total calories. Not too shabby. The downside to dried peas is finding them in packages larger than one pound bags. It seems impossible if you do not have a restaurant supply store you can visit. At .79 a pound the overall cost for a pail of peas (sans pail, bag etc) is $23.70 so it ends up being a bit pricey. Still peas have so many benefits and the addition of one (1) pail per person for a year gives the prepper many miles of food storage and calories for an acceptable outlay. An alternative to think about.

Noodles - Recently I began adding noodles to my storage plans. While not really overly economical nor space efficient I thought they would add something to my overall storage by being especially useful when other (non-stored) food is foraged and eaten. That and I am not a huge rice fan anyway. Typically I buy my storage noodles in 6lb. bags. I do not buy egg type noodles as they are reported to go bad much faster than the flour only ones. Typically you can get about 12 half cup servings per pound at 210 calories each. Therefore a bucket containing 12 lbs. would yield approximately 144 servings and 30,240 calories. Not too shabby. The storage life is reported as being as long as four to five years or more but I have not tested this theory. Overall I store noodles the same way as I do grains with moisture and oxygen absorbers inside a mylar bag and inside a five gallon bucket. Your overall numbers will vary depending on what type of noodles you purchase of course.