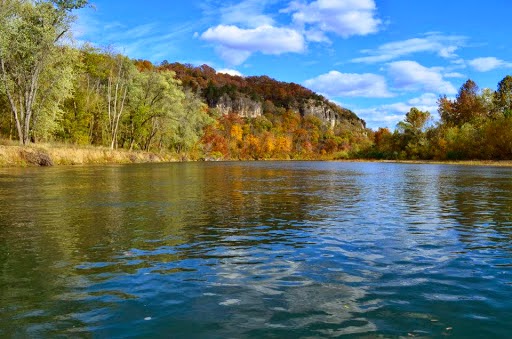 I headed down a  stretch of road yesterday I haven't been on well over a decade. Not since my old days of kayaking every river and stream I could get into have I been that far down into South Central Missouri. Hwy 5 which meanders down the center of the State crosses over I-44 at Lebanon, Missouri at which point I turned South and followed it.

The headwaters of the Gasganade river meanders across the hwy here and there, that river and a couple of streams is what brought me down that way years ago. Also hwy 5 eventually passes by the Baker Creek seed place closer towards Mansfield.

The first thing I noticed just after leaving Lebanon was the number of abandoned houses and other buildings. For 15 miles more or less every old driveway now had a brand new green gate and a sign that said "Empire Ranch". At one cross roads I swear this Empire ranch had bought up an entire little town and left it to rot. About the time we crossed one arm of the river you could see a huge "lodge" had just been built up on the ridge looking over the river and it appeared to be quite expensive. I tried looking up what this place was but couldn't find anything about it on the internet so who knows. Obviously it has a lot of money to throw around.

What few places looked to be still occupied were mostly starting to look pretty run down. Stacks of firewood for sale outside and cattle appeared to be the only money making ventures going on. All the way down to Mansfield it appeared at least every third house or farm was abandoned with many for sale. Some of the abandoned places were in better shape the further South one went but the numbers didn't change.

It appeared to me somewhat creepy to be honest. I am not sure what has happened to that area.

There were a few homesteads along the way that showed some real resilience. Well stocked wood piles, chickens, some goats etc. but they were damned few and far between. The number of abandoned homes and farms though has me wondering just what is going on there though because it would be an ideal area to set up a self sustaining homestead.

If you have any info on the area let me know.