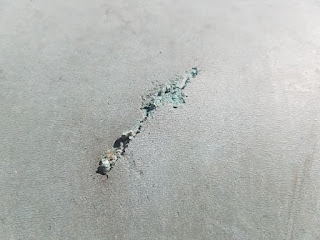 The cheap rubber/plastic welder kit I ordered came in yesterday and since I had a day off today with very nice weather I decided to give it a try. I have two old stock tanks that have pretty serious tears or cuts in them and for the last year or so I have been using them between a fence and a concrete well cap to kill off the weeds that grow in there so I don't have to weed eat em. Mostly I put em there just to get them out of the way really. I had four but I repurposed two of the smaller tanks as planters this year. I kinda wish I hadn't done that now but hindsight and all that.

I had about a 50 gallon green rubber one that is in the first picture. The puncture was about one third of the way up the side of the tank (top picture). This tank has been laying around in the barn for a few years before I used it as a weed cover. The puncture is the claw end of a regular hammer. No comment on exactly why the hammer managed to puncture the side but the entire rip is about twice the width of the hammer in question. Over the years this puncture has dried out a lot and began to actually crumble the rubber that was sticking up. 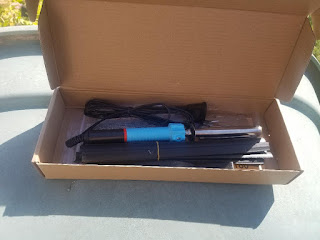 Here's the kit. Has a little non-adjustable soldering iron in it, a bunch of black plastic strips for the welding compound, a couple squares if wire mesh and three screw ends that are shaped like little flat triangles. I ordered this one but it is exactly like one that can be purchased from Harbor Freight for about 17 bucks. I think I paid 19.00 for this one.  There is a sheet of don't and I think instructions. All too small for me to read as well. 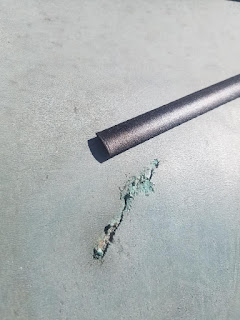 Top is another pic of the puncture and one of the plastic weld sticks. The pic makes it look round but it is mostly flat with a bit of a curve on the top. I started off trying to melt the weld material into the crack and smooth the edges in to blend em together but quickly realized the hardest part of the operation was not touching the undamaged rubber with the edge of the iron head.

I quickly added a pair of tweezers and scissors to the kit. I found cutting off small bits of the welding rubber stick and putting them into some of the larger cracks or holes helped fill in and blend much better than attempting to do it with the flat or edge of the iron. 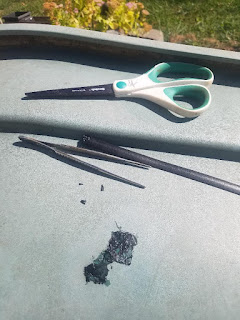 The process did take some getting used to. The iron head is difficult to control and frequently blocks the working view. It also looses it's heat fast when attempting to blend the melted rubber together. I soon figured out a good way of working this was to melt a much larger piece off the weld "stick" and let it flow into the hole but unlike using a real welder the plastic filler stuff tends to stick to the iron head. I started using the tip to actually cut the weld material a bit than give it a second or two to cool so the material would not stick to the iron head. The little black specs are pre-cut bits of weld material to put in deeper holes. 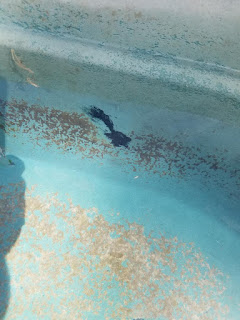 I let the tank set for a while than cleaned and filled in the inside of the puncture. Filled the tank up and let it set for about an hour with no leakage.

The second tank is much larger and had a long thin slice in it along the bottom. I know how it got cut too as the end of my blade sliced it open. It is a much larger tank but seemed to weld up much easier. Being black none of the pictures of that tank showed very well but it was so big I had a hard time finding an easy way to weld it with my head all up in it.

The weld on it began showing a pin prick leak after I filled it so I am going to need to drain it and try again. After both dry I think I am going to try spraying em with some Flex Seal just to help a bit and then the over Winter test to see if the weld seal spring a leak once it starts going through freezing and heaving then refreezing.

The large tank was originally a horse tank so it is much too tall for use with the sheep so I will probably place it under the Garden shed down spout and use it for garden water if I can get it to stop leaking.

All and all at 19.00 bucks it is very worth it to save even one smaller tank if possible. Them things are running about 50 bucks for a 50 gallon one now. On the upside I am also pretty sure the soldering iron will heat up using a standard converter off a solar battery if needed.

After a trial period I will take some pics of the filled tanks and give a report on how well the welds have kept up.

Posted by PioneerPreppy at 6:53 PM