Is This It? - The Grand Melee? 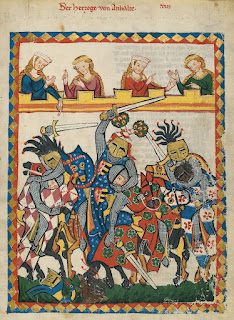 I don't know how many know what a Grand Melee is. In truth it took on many forms depending on where and when it was held. Generally speaking a Grand Melee was set on the last few days of a Royal or highly sponsored and attended Medieval Tournament. The various participants would basically form small armies and war against each other. Sometimes these melees ranged for miles in the country side and ended up becoming actual mini wars that recruited previous non-combatants, had sieges, pretty much a no hold bars type of thing where depending on the times anything could and often did happen. Castles were captured and used then besieged, hostages were taken. Factions switched sides or formed alliances etc.

Of course politics of the time always had a big impact on these things. Grudges, current maneuvering or squabbles etc. could greatly influence how these melees often times progressed. Many an actual war spawned or were thwarted due to the outcome of these affairs. Let the wrong combatant be taken captive and his ransom could finance a war for years to come or ruin it's chance of beginning all to gather.

The part of a Grand Melee that effects us today is not so much which Duke is maneuvering to place his Son in Law on a  throne or restrict some new Right the King claims is his but the fact that the peasants are basically just pawns in the entire affair.

Many people assume I am a Republican due to my steadfast opposition to Democrats. I am not. I am in fact a Constitutionalist and always have been. Under the current manifestation of the Democrat party that requires complete opposition to them simply on ideological beliefs if nothing else. Yet what we are really facing today is so far beyond simple party, National political affiliation, borders, race, gender etc. it now bears little in common with the world we once lived in.

The aristocrat politicians of the West figured out some time ago that actual power could be easily manipulated by influencing the Mob and what better vehicle for mob manipulation than the media for popularity and a citizenry of low intelligence voters? No law would be sacred. no right could be retained and any crime could be erased when you have the power of the mob behind you. It would still cost you though.

The Founding Fathers of the United States knew this. They gave us the perfect gift needed for a Christian peoples to defeat such a movement. They knew a Republic would lead to loose fiscal policy but they also knew that buying votes could work for a while but eventually those votes would cost too much to be sustainable. The Constitution has been under attack ever since but always geared towards a way to over come the law of supply cost for vote buying.

You might ask where this is going but the next step is to grow by numbers that increase power through those numbers. Unrestricted immigration, totally universal suffrage etc. The only way to keep the ponzi scheme viable is to constantly add to the base. For hundreds of years the political aristocracy has been playing the same game in the US. It did not matter what mask they wore it was all about gaining total control.

This is why many people will claim there is no difference between the parties. At many levels they are correct. What the populace vote buyers did not account for however was the power of the US Constitution and just how much violating the very rights written within it would inflate the price of vote buying.

This leads us to where we are today. The Western method of vote buying used by political families of all parties has become unsustainable. The parasites are over coming the host so the US began exporting it's vote buying democracy to the world. Democrats and RINO families alike have been in on this for generations.

Want to understand why staunch Republicans turn and become closet or sudden Democrats? They are simply part of the World Political Aristocracy.

Problem is the entire Western World is no longer sufficient to maintain the cost of keeping the illusion going. We are witnessing a Grand Melee between different Aristocratic Ideologies. Things are shattering. Allies will turn on allies, countries will flip for inexplicable reasons, alliances will be broken and movements will be exposed as lies, resources will become scarce. Always keep in mind however none of these factions are on our side.

If you decide it is time to jump into this world wide grand melee  make sure whichever side you support follows the Constitution and Christian values to a T or you will eventually become a victim. There is only one form of government that can remain at the end and that is a Constitutional Representative Republic.  Everything else is just a dead end ponzi scheme.

Posted by PioneerPreppy at 9:37 PM