Ukraine is the Start of the Resource Wars 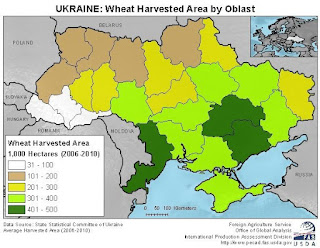 I have been toying with this theory since the Russian Invasion of Ukraine coincided so coincidentally with other world problems and shortages along with, in my opinion, a great increase in Global political issues.

As I have mentioned not all players on the world stage are on board with the Western Liberal World order or that movement's ideas regarding how to proceed. Many sensible nations that value their own populations are not so ready to throw them to the wolves just to gain more votes or an easier to control population.

That does not mean most or all World Nations do not see the numbers and realize resources are getting scarce. Unlike Western Liberal nations however that would rather control their indigenous populations and force a decrease in individual rights, consumption, production and/or quality of life in favor of importing political power from third world cesspits. Many Nations understand that controlling resource production, land and productive populations is a much better option moving forward for the crisis that is developing.

Without choosing a side here it should be noted that Ukrainian forces have not been squeaky clean with their dealings towards Crimea and the Donbas area for several years. I will not go into the history of the conflicts, invasions or treatment of those people right now but I would urge any reader not familiar with the recent history of those areas to do so themselves. More to my point at the moment is that it presented Russia with the excuse it needed to gain more productive land and people.

Russia has now managed to occupy most of the highest agriculturally productive area of the Ukraine according to the study I linked below from the World Data Center.

Combined with the resources for energy and wide open Siberian it already has these gains place Russia in a very cozy spot going forward. Especially with the removal of Western financial and political control mechanisms like SWIFT, Petro Dollar etc.

Think these moves are coincidence? Well here is another article from Brietbart again detailing the recent meeting between Erdogan's Turkey and Putin.

Every International move these days seems to be directed towards an obvious decoupling from Western Financial and political control systems which allow BRIC+ nations more and more autonomous decision making.

The question now is how far will either side go and how will that effect every day life for those of us trapped on the Liberal side?

Posted by PioneerPreppy at 2:16 PM