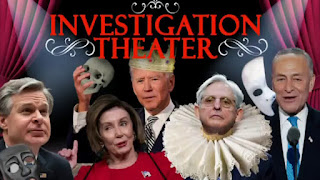 I really wasn't going to get into this FBI raid thing on Trump. I been following and posting too many politically orientated musings lately but the truth is I have been trying to catch up on yard and especially garden work lately and both of those leave me a lot of time to think while working.

Listening to some talking heads and reading other theories and such I came up with my own theory. I thought at first it was unique but then found out others have come around to this theory as well, so I am not as original as I first thought.

I got to start here with my first original thought that popped into my head when I saw the first announcement about the raid though. I really wanted to know what happened when an FBI raid meets a Secret Service protection detachment specifically protecting an ex-President. Man that would have been a story but Trump wasn't home so there are no real world actions to evaluate.... Yet anyway.

So anyway here is my theory, concocted in my own aging brain complete with, what some would call an obsession with hating any thing Femocrat as a bias. I am not going to try and explain it beyond this post but when the smoke clears I am really interested to see how close I come to reality down the line.

This entire move was initiated by Piglosi and her January 6th commission with the sole purpose of attempting to connect Trump to the January 6th protests. They will invent some fake evidence and then attempt to try him on made up charges. The end goal is to convict him without allowing a defense and claim Trump is therefore unable to run for President in 2024.

They (the Commission) have been doing this since the commission started and recently other courts (all Democrats) and judges have basically used the same tactics in other cases. Namely the Alex Jones farce as one example.

I mean why not? Congress has illegally held Americans for years now, has not allowed any legal defense and therefore convicted Americans illegally. They are operating under no Constitutional authority but their own, no one is stopping them so why not? Also even if some states do not follow along with the Femocrat moves some will and not allow Trump to be on that state's ticket. SCOTUS won't hear the case and even if they do again the Femocrat states will refuse to abide by any judgement passed down. Etc. Etc. Etc.

You get the point.

Now I am not saying some or many someone's won't do any of that. I am not a defeatist that claims all American's will do nothing, I am simply saying the Femocrats don't think anyone will so why not do what they want? I am not making a prediction on what will happen going forward from this point only how we got to this stage right now. I just want to see how close I am down the line when it is finally exposed in all it's nasty details.

The Femocrats realized with their last election steal the courts do not matter, it's who is going to enforce the court's decisions (assuming they even make one) that matters. They also know there isn't any entity that will. The Constitution has been so shredded and misrepresented there is no clear cut way forward in a case like this (Again in their minds) and even though there is a clear cut road it has already been proven the entity that is suppose to do the enforcing, won't.

We maybe actually shooting each other before this is cleared up.

Posted by PioneerPreppy at 3:12 AM