Any good conspiracy theorist will tell you there is no such thing as coincidence.

An election full of "issues". A continuation of perhaps the most aggressive anti-American Regime in history run in proxy by a brain dead idiot with prior Regime helpers. A series of completely ruinous moves that pretty much destroys the economy with absolutely no good reason for any of them. Mass under calculated inflation right after a trial run of world wide lock downs and government control. Nation-wide primary elections that show massive distrust and electoral movement/shift to the right. Emergency legislation passed with an almost over night 90 degree reversal by previously staunch hold outs that raises the IRS budget from 12.6 billion dollars to 80 some odd billion with no exact end date. Hard on the heels of Unconstitutional Gun control legislation that is sure to be ruled against by the current SCOTUS. Followed by a raid on Trump's private estate?

And I ain't even done yet. the IRS has purchased over 700,000 rounds of ammunition this year alone so far.

What is going on here?

If I didn't know better I would wonder about a failing and over spending country suddenly looking at the possibility of a massive tax enforcement move. Not like that hasn't happened in just about every failing empire since the dawn of man.

I would also wonder why a country that has not given a damn how much debt it takes on for something like 70 years is suddenly so interested in tax evasion, collection and enforcement. To the tune of over funding it's tax department by almost 600%. Especially right after destroying the two most valuable currency leverage positions the country has enjoyed for DECADES.

Why someone would almost think they know the gig is up and it is a "take it now or lose it forever" type scenario.

The US is going to be a tinder box before the next election. The only reason it is not completely up in flames now is there seems to be no one with any means or power opposing this hostile take over. Even one State or geographical area in open defiance right now would strike a spark like the world has never seen.

I mean who is going to stop any kind of refusal to continue along right now? The Woke Military? 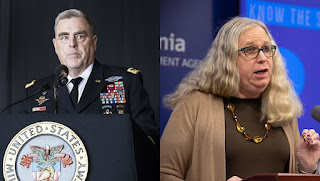 I never thought I would live long enough to see the formation of an anti-American Fascist political and military force within these United States.

One good thing though. Even at damned near 60 I might be a better soldier than what this group can field on average.

Posted by PioneerPreppy at 9:36 PM