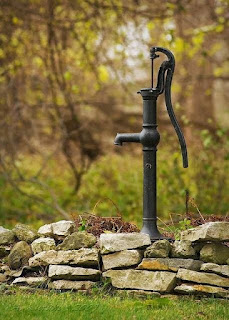 This focus on water issues is actually a renewed effort. One of the first projects I took on around here was water issues. Any casual stroll around an old farm in this neck of the woods will prove how water issues have always been a big problem for small farms in this region and almost every one of them approached the issue in the same manner and then switched to the exact same solutions as time went by.

A hand well was dug, a cistern was put in the ground, often times gutters were eventually ran into the cistern with a hand pump installed over it and if they were really creative a hand pump in the kitchen was also connected.

A pond was scooped out to collect water for the live stock and sometimes extra wells were dug/pushed into the ground with a larger hand pump installed on top around the place.

When electricity became available well pumps were built and in ground pipes dug.

When/if county water lines became available they were switched over to that for the house and nearby use while the ponds still used for the stock.

The small hold has all the above. The hand dug well is still here and actually still refills itself slowly. I wouldn't trust it though cause it isn't the deepest thing either. I probably should have filled it in years ago but I capped it with concrete and a metal lid just in case. Bottom line not an option I want to start using with the amount of chemicals left on today's soil.

The main water pump that was integrated into the system went dry back in the 70's I think. My guess is it was drilled in the 1930s by some of the junk still laying around in the pump house. Whenever the county water was brought into the house someone had the bright idea of then connecting the house and pump together into one system. Which I guess makes sense as it would have been much cheaper when the well did go dry.

Of course when the well went dry the pump had to be disconnected from the "Chef Boyarde" Frankenstein system. The rain water gutter system into the cistern and kitchen hand pump were already long abandoned along with the mostly forgotten hand dug well. There were still two hand pump well heads that had been abandoned closer to the barn but were already intermittent in refilling.

I have seen this exact time line on probably 100 old farm houses my entire life. I have probably seen every type of hand water pump installed and rusting away around the region that has ever been tried. I especially like the ones that have the million little cups in them on a long chain that brings the water up a cup at a time as you turn the crank.

Eventually pipes were run and the frostless spigots were installed pretty much everywhere.

This is what I walked into when I came back to this place.

As I mentioned it was one of my first projects around here and also one of my largest failures.

The particular problem with water here is the freezing issue of course and the heaving and/or layered freezing that will trap water in between layers of ice that will then freeze and bust any above ground storage container.

You can use heaters or agitators but that requires electricity ran to the tanks and you still need to get water to that point. Many around here just kept relying on catchment ponds or at most drilled a new well. At the height of our immediate area new wells have been unheard of for years. They are just too expensive.

My problem is I have been racking my brain trying to come up with a solution that is 100% sustainable in a total grid down situation.

My original solution was repairing and replacing the gutters, adding the cistern back into the system as emergency storage for the stock animals and the garden. Also repairing the gutters on our fairly large barn and adding in some large above ground open tanks that I then drained for Winter.

This has worked for years. The pond has filled up and needs repaired but has not been needed since the horses are no longer a concern and I am down to just 11 Sheep and 3 goats. However recently the cistern is itself beginning to leak and all the new construction around here is really stressing the county water reserves too. It's too the point that the water pressure is not even half what it used to be at certain times. If I had not had what collection and storage I have left I would not have been able to water the garden as much as this drought year brought us. It has basically moved my once more than adequate solution to the status of needs immediate attention.

Only real solution I can come up with is a new underground cistern but that of course is going to require more excavating work hired out.

Unless I buy my own backhoe or attachment. Perhaps that is my next move? Either that or a lot of digging with a shovel... I thought I had these issues fixed but everything changes and deteriorates with time.

Posted by PioneerPreppy at 12:43 PM