The Lesser Known Side of the Ukraine War 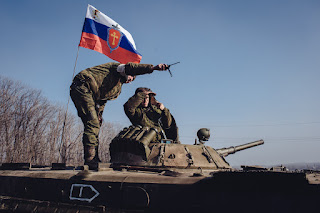 I won't deny it, I am a sucker for Separatist Movements around the world. I always have felt pretty much ALL governments are way too big these days to be anywhere near Representative and Separatist should always be allowed to go their own way.

Should have seen me cheer on the Scottish Separation movement a few years back.

There is usually a very good reason for them wanting to go their own way that is almost always twisted into some explanation of racism or bigotry by those who wish to continue leeching off them. Just my humble opinion usually.

The above picture I believe is one from the First Slavyansk Brigade  of the Donetsk People's Republic Army. I also believe it is 7 years old or so.

Yes there has been Russians and Separatist fighting Ukrainians in South Eastern Ukraine for a very long time.

Just to give you an idea of how some of these Separatist feel, and why those of us who do not agree with Western Mainstream media have such a hard time finding pictures of the "Independents" who are part of the Russian Separatist Police Forces inside Ukraine. Well many of their unit and National flags are obvious plays on Confederate Flags of the American Civil war. Showing them will get your posts removed by Western Internet companies and it is almost impossible to find a meaningful picture of these troops without showing a flag in it.

Scott Ritter" NATO was Behind Surprise Offensive in Karkiv. What's next for Russia?

The above is a YT video by Kim Iversen. Scott Ritter is an Ex Marine, Ex Army Intelligence officer etc. who was mentioned a lot back in the 90's and early 2000's as a Weapons Inspector. At one time we flew close to the same orbit but where I decided to stop anything government connected he kept going. His bad. No we did not know each other. Finally the guy was convicted in an online sting operation as a sex offender. There was no contact ever mentioned it was all digital I believe but the Femocrats been after guys like this for decades. That is all I know about it.

Anyway the video is interesting as it shows TIKTOK's of very English speaking trooper doing a selfie as he enters Izum. The video also speaks to the rumors of NATO troops being inserted into the Ukraine to fight with the Ukrainian army, the make up of Russian police units around Karkiv and other things. Also a bit about casualties and other interesting tidbits. I recommend it.

Those of us stuck behind Liberal Media brainwashing lines who do not want to buy into the despicable Femocrat money laundering lies must find our news sources where we can these days. Plus be very careful of the imagery shown in pictures.

Here is another "disreputable" Intelligence officer writing about recent developments in the Ukraine.

How Long Will Western Support for Ukraine Continue?

Many good points presented by another Ex (this time CIA) from that late Boomer early Gen X generation of Males constantly attacked and discredited by Femocrats at every chance. Again take it as you wish.

I still maintain that this latest explosion of the long on going Ukrainian Separatist conflicts is intertwined and  connected to the recent WEF and Liberal World Order tyranny we see all over the world and Democrat money laundering within the Ukraine itself.

Whatever the case I am still a fan of Separatists.

Posted by PioneerPreppy at 12:53 AM