My Moral Delimna This Week 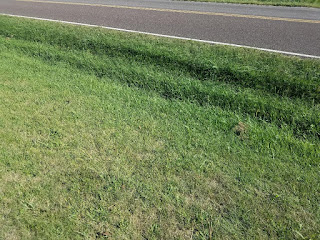 Ok so I am actually looking for opinions how other people would handle this situation. Especially before I end up in a shoot out on my county road that would probably include jail time before it is over.

See the ditch above? I been mowing that ditch off and on for probably 50 years or so now. The last 30 about every week. As a kid I did it a few times with a push mower, various riding mowers etc. At one time the ditch and banks were actually wider and the ditch deeper, much deeper but it has been filling in steadily over the years.

This ditch has caused me no end of aggravation too, as it has now filled in to where it is higher than my basement and has forced me to put caps inside my drains to keep the water from backing up and making the basement a lake. The drains were old clay and I could not find them to get rid of them but they were under that dirt somewhere and still seeping water from the ditch when it got high enough right into my basement.

And Kudos to the reader a few years back who told me how to fix that issue too!!!! You are a hero!!!

Anyway there is only one way left I can mow this ditch due to the steep sides next to the road, on coming traffic and the thickness of the grass. I can no longer use my tractor. My zero turn slides down the banks and into the (often) wet ditch and gets amazingly stuck with it's wide deck, which requires me to get one of my tractors and pull the mower out. Hard to do with my son gone. Now days I am physically not able to use a push mower on it and again the steep sides make it almost impossible as well. This leaves me with two options.

I can either use one of my old riding mowers where I lean as far off it as I can to keep it from rolling over and try and keep the oil from burning in a cylinder OR I could just let it go and not mow it.

Option one means I have to stop mowing about every 10 foot or so now and shut off the blades or blow grass clippings into incoming traffic. Option two means I just let the Johnson grass grow up and hide the very dangerous ditch and no shoulder, not to mention give the now constant passing traffic a few good close encounters with running wildlife.

Now a couple of other things to keep in mind.  I hate mowing this ditch and blowing grass clippings out because I almost always get covered in grass doing it. I would love to NOT have that fun pleasure believe me. If I had any other option I would take it, but I do not. Unless I want to not see on coming traffic on a road with no shoulder. In the old days I would ride the mower up and down the road a few times to clear the grass off but that is no longer possible with all the traffic.

No it doesn't really say Fat.

Now, if you hadn't already figured out where this is going I am sure you see the problem.

I am going to get into a shoot out with one of these bastards eventually I can see it coming.

It isn't like I care what someone wants to ride. Hell I even like old Bikes even though I am more of a truck and muscle car guy myself. Saw some old dude come by here the other night with a 70's era Yamaha modified into a cafe racer with stacks that was f-in hot. I live on an arrow straight stretch of road over 2 miles long and flat so I know these guys really want to get on em and get pissed when they have to slow down but ya know that is part of it. Deal With it.

BUT I am not clogging up my mowers and spending hours un-clogging them because these old guys want to speed on a bike. Especially when the grass will be gone in about 10 minutes anyway due to the half a million new plastic SUV's living out here now.

I am seriously considering just stopping mowing the dangerous, Wild life crossing, no shoulder ditch and putting a sign up saying "Thank the UNsafe Bikers and their vehicles for your up close Wildlife encounters"... You're Welcome.

I thought about a sickle bar mower but that means I will take up most of the lane and I still cannot get it completely down to that steep an angle. I can leave it for the county to mow, they get around to it maybe once every 3 or 4 months if we are lucky. They sure will hire someone and increase our taxes though.

These old bikers come by bitchin, rev-in there engines and screaming plus pointing and I just give em the bird and tell em to stop transporting their old cow on their bike. One of these days it is going to escalate I can see it coming but I am just going to stop mowing it before that.

I am too old for jail now.

Like I said believe me if I could figure out some other way I would take it. I don't mind blowing the grass in but it requires me to turn my back on traffic on a narrow road and is only possible at the very top anyway but last thing I want to do is cause anyone any trouble or put someone in danger they could easily avoid, it isn't worth it.

Posted by PioneerPreppy at 7:01 PM