Maybe I was a bit Early 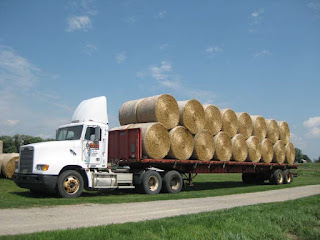 Seems my observations concerning the lack of hay being hauled out of the area were a bit premature. Friday I spotted a veritable division of Semi-Trucks hauling round bales down the highways with a good mix of Western State tags on them besides the usual commercial plates you see on the contract hauling rigs.

Tells me private farms are hauling a lot of what I saw for their own use.

As I mentioned the farmers around here have also been using the opportunity of lower cattle prices to increase their own herds even with the near drought and heat advisory conditions we have had for over two months now.

The high heat and dry conditions have played merry hell on my garden production and mostly killed off the Dutch Clover my bees like so well, as I have mentioned several times here. Yet it has not effected the hay crop as much as I thought it would.  We had three different locals stop by asking to bale the fields for us this week alone. Even the smaller front fields usually deemed as too small to worry about were asked about, but my usual guy actually cut our fields Friday morning.

I walked over it in the evening and noted it was a nice cutting too. The fescue was a bit dried out but the red clover and orchard grass under story was thick and green. He is going to get a nice haul out of this cutting in my opinion. I will try and get a count when he comes back to bale it probably tomorrow if my guess is good. I already told him to take it all as I have so much hay I don't need anymore at this point.

I been working on those smaller front fields the last few years and even though they are small they are looking good.

Posted by PioneerPreppy at 1:04 PM