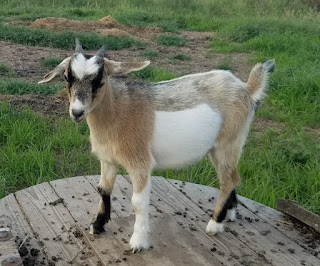 Not a new picture I admit. I really need to get a glare filter as the snow cover pretty much ruins any pics I tried taking in this weather.

As of my morning rounds this AM and again my early afternoon rounds I just got finished with all animals around the Small-Hold are accounted for and appear to be in good shape. The ram is a bit grumpy though as he wants more fresh hay from this seasons round bales and not the old stuff I been feeding him since his other bale froze.

All the chickens were out this morning although they did not venture far they were all there. Nugget was released back into the goat pasture but we will need to see if the dominant female kicks her out of the house again tonight. Nugget seemed pleased with her much warmer over night accommodations and barely made a sound all night although she did wait until we got her out and were heading for the door before she decided to leave some solid traces behind. When we brought her in last night she was standing in the blowing snow shivering and could barely move so I had to carry her inside. I have no doubt she would have succumbed to the cold if we had not brought her in.

The sheep of course don't see what all the fuss is about and only seem a bit pissy about the snow covering up all the left over grass. The 2 to 3 foot drifts are not much of a problem as they just plow through them without really noticing. They also have a new bales I manged to get out for them so they just focus on that.

About 3 AM this morning I stood out in the snow by the wood furnace and figured out why the Ram's water is always low. I watched about half a dozen rabbits come by and climb the snow drift next to his water bucket and dip their heads over the edge. They were scattered by a cat I have never seen before who took a quick drink and this morning I noticed a set of coyote tracks leading up to it as well. I guess he stuck his head in through the fence. I always figured we were running a Winter water hole for most of the wild and feral animal population but I have never been able to actually witness it in action before.

We got up to 12 degrees this afternoon and it feels like heaven. My one mistake through all this was I should have hooked up the blade on the 8N so it would be ready to use to cut through the snow drifts. Other than that looks like we are slowly starting to climb out of this frozen hell bit by bit. Still have a few more negative nights left they say but hopefully they will not stay around long although another snow dump is possible tonight and tomorrow morning.

Posted by PioneerPreppy at 2:53 PM