The Silence Really Says it All 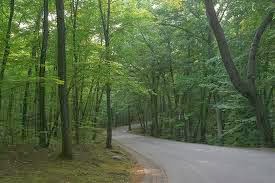 We seem to have taken another step down in the traffic area around here once again. I know it is Winter and all that but I really didn't think it was possible for traffic to fall any further than it had over the last few years.

These days about the only time I see people driving by are the early morning hours until 8AM and from about 4 to 5:30 PM. After that it is just dead.

And I mean dead. Dead quiet. When the blower shuts off on the furnace I can stand there and hear people talking sometimes that are over a mile away. I never remember being able to actually hear another voice while standing in the side yard.

My trip to the hardware store last week yielded an atmosphere that bounced around between panic, desperation and hopelessness. The store was rearranging everything during business hours and the employees, normally very helpful and upbeat, were muttering things about being out of stock and disorganized.

My guess is I was seeing the first stages of some serious downsizing creeping in and the employees know it's coming. We will see.

Just another stage of this decline and eventual collapse. There isn't enough to go around and in the case of taxes and consumer spending the 1% are in no way enough to keep all the retail space built during the 00 boom period open. This in turn is going to spell even more financial difficulties for the city and county municipalities.

Yet through all the bickering and struggle the silent areas will slowly creep their way back as the loss of money equals the loss of control. Not all that long ago people couldn't wait to build or buy houses out here. Yesterday I noticed three new for sale signs pop up on the cheap little suburb down the road. That's three new ones to add to the four or more that were already up and those are only the ones visible from the county highway.

In 2007 the area around the Small-Hold was prime housing real estate now everyone thinks we are too far out. I saw this sea change coming back then and I was banking on it. The can manipulate the numbers and present them anyway they like but they cannot hide reality.

Reality is what is going to bite most people in the Ass.

Even my neighbors are acting differently. The ones who had fairly lucrative small businesses and were in and out often during the day are no where to be seen now. I pass several of their houses while out checking my bees and I know the families own four or five vehicles but until recently I never saw them all parked there at the same time. These days some of them haven't been moved in a while.

You can feel the discontent growing as the pie shrinks.

The most important thing to keep in mind always is the same basic principal preppers have been saying for years. If you can't hold it in your hand then it's just a promise and not worth anything. Tangibles are the only real assets. Never forget that.


Posted by PioneerPreppy at 7:53 PM