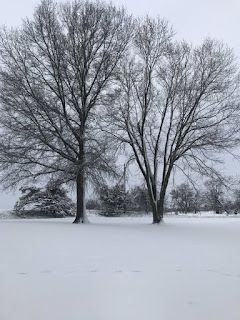 We have had basically four days straight with temps under 8 degrees and the last three have not climbed above 2 or 3 degrees total. Wind chills have varied but have been as low as -20's. We still have running water in the bathroom though!!!! All other lines have been shut down as conditions left us with no choice but to shut em down before they froze up. Honestly I am amazed I have not had to shut the entire water off once and for all.

Any of you remember when we were kids the old folks saying "It's too cold to snow"? Well they were liars. There is no low end range I guess. We got drifts 2 to 3 foot deep in places and it is still snowing. The only bright side to all this is it's a very dry snow.

The water tank heaters stopped keeping up this morning. Well two of the three did. I been breaking the ice on them about every four hours but the ewes don't even seem to care. The ram's water is still staying open but he won't even get out of his hay bed and the chickens have retreated into their coop and formed a ball similar to the one bee's form when they swarm. I also added a bunch of hay into the coop so they have insulation around them. I go out three times a day with water and food for them.

The goats are another problem. The house the three of them have been sharing for years is stuffed full of hay and unless I go out with grain all I see of them is their little horny faces. However now the lead goat Houdini has decided the small goat Nugget has no need to be in there and keeps kicking her out. She has been looking miserable standing in the cold wind all afternoon so looks like we are putting her in the huge dag crate and bringing her in the house for the night. That will be a first.

One more night supposedly of this frozen hell and the temps are predicted to climb into the teens again. I can handle teens for extended periods easily. All the work I have done on this old house I have managed to Winterize it fairly well even down into the negative temps as long as they don't stay around for days with high wind chills. Unfortunately this has been one of those rare Alberta Clippers that chose to move in for weeks. Wasn't until Sunday things started getting dicey though.

Posted by PioneerPreppy at 5:47 PM