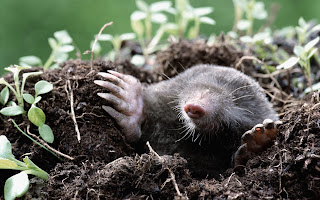 Well not really a new menace, these guys are kinda old adversaries of mine really but one that does so little damage I rarely go after them very hard. Only times I ever have any real interaction with them are during droughts or near droughts when they move into my garden areas for the moisture and bugs. Any other year they stick to themselves to the point they never get out of hand.

This year however they have caused a few issues. One was tunneling around just under my mulch in the middle of a fallen cucumber patch sprawled across the ground and managed to get the attention of my dog, Winston. The great oaf tore up about three cucumber plants getting the thing and than proceeded to carry it around to show it off. Eventually he dropped it and the thing got away before I could get there. With my luck it probably lived too.

Later while relaxing in the shade next to the water tubs I watched a hen pull a mole up out of the loose dirt by it's stubby little tail. It would toss the mole up in the air and chase it down pecking it but the mole was way too big for it to swallow whole of course. Eventually I stomped on it and last I saw the chickens had gathered as a group to eventually peck it's remains clean.

Who says there is no free lunch?

Starting Sunday night the temps have dropped significantly, we didn't even get to the 90's today and that cursed Sun has been covered by clouds for two beautiful days. I saw bees out foraging again today and actually managed to find four little bitty bean pods that have formed already. I may get beans this year after all. In fact I have noticed about a dozen new water melon fruits set and grow beyond the blossom rot stage already. Now if we can survive the fact that the only good place left for the chickens to forage is the heavily mulched garden things might begin to improve.

I can't complain much as they tend to only scratch under the Sunflowers and Tomatoes but they do like to peck and eat all the low hanging green tomatoes they can find. Normally I don't mind the chickens getting in the garden but this year of course it is becoming the favorite and only  place to be and they are causing more damage than usual. Perhaps this weather change will help alleviate this problem as well.

That is just about it for now. Rained almost all day yesterday and most all day off and on here today as well so my excursions have been brief, which means not much actual work done but feeding. Still I have hopes the this is the end of the last two months of Merciless Sun killing heat.

Posted by PioneerPreppy at 9:08 PM