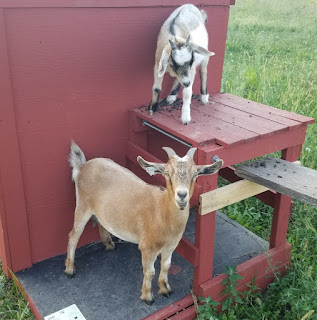 Believe it or not we are still alive at the Small Hold. I know over a year again since an update and it's to the point I am not even sure I remember how to post. Along with all the other problems and living under yet another Femocrat screw up President I somehow got all my computer cookies jumbled and even logging in these day's seem to be a problem. If anything the general environment of the United States and the hostility even on the internet these days is making everything more difficult. Of course the steady march of time doesn't stop.

All I can say is there have been a number of changes around The Small-Hold since I no longer am taking care of my mother everyday. I spent all of last Summer cleaning out barn space, rearranging the outbuildings and opening up areas I had left alone for years due to prior promises and the like. This mostly included space and agreements that specifically addressed the care and upkeep/feeding of the useless horses. This is no longer a problem and I was then able to focus on the devastated EX-horse pasture. It is coming right along and I am making huge progress now since I can keep it not only mowed but also allow the beneficial grasses to get ahead of the weeds now that they are not consumed faster than they can grow. The last remnants of the sheep flock is dying to get in the now open pasturage but that is not happening until I fix the fences specifically for them.

Speaking of sheep. We still have 11. Three Withers, seven ewes and a Ram. We lost three ewes just in the last year and still have two ewes above the age of 18 in the flock. The rest are mostly getting into their teens now but there are still about five younger ones that will be with us for a good decade yet I imagine. Breeding is done. There will not be another oops lamb born if I can help it. The real reason for this decision is the lack of shearers available. I am good friends with the only shearer I know of still operating in about a three or four state area and when he retires looks like that will be the end. I know I will not be able to do it myself physically and our only recourse would be to sell what is left of the sheep when that day comes. I figure it is just best to let em live as peacefully as possible and hope the shearing option out lives them at this point. Not that I am being especially snowflake about the thing but a couple of sheep is not enough money to be really worth the effort or pays well to be callous either. Let em enjoy what time they have left. Honestly I doubt the two oldest ewes and the ram will be around next year as it is. If I could find someone who wanted a few prime breeding age ewes I would let em go but you just cannot trust anyone these days to tell you the truth.

The new fence partitions are working very well and so is the new and improved garden area. I hope to have pictures of it soon. Seems placing it in the middle of sheep and goat pastures has worked as I planned as the live stock is keeping the bindweed and rhizome grasses from being able to take root since they eat it as fast as it grows. This is allowing me to continue with my heavy mulch and ground cover gardening without moving it each year or so or having those pesky weeds sneak in from a non-grazed area. Thistles are still a problem but they are more easily dealt with in a small area than the others. The new problem is that I am not going to replace the sheep as they age but goats I may continue to accumulate as the sheep die off. Trying to figure out how many I will need to keep the areas grazed properly now. Also dwarf goats are much easier to re-home than 200+ pound sheep that need shearing every year so a goats life is not necessarily tied to my own age and health as a much.

That's it for now. I am still hoping to revamp this blog and get back into many topics besides self sufficiency. Seems everything that was so important 10 or 12 years ago is taking a front seat once again.

Posted by PioneerPreppy at 9:22 PM