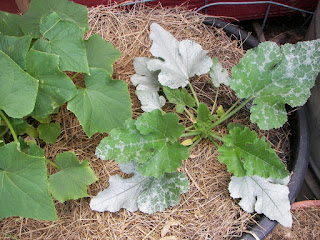 One of my Zucchini has been infected with powdery mildew. The horror. It's a pretty easy thing for them to get around here this time of year. Not a huge big deal I could probably just wait another few days and the late June heat and Sun would kill it off and save the plant but I am going to go ahead and treat it with the super secret powdery mildew spray concoction.

1 tbl Spoon baking soda, 3 tbl Spoon of cooking oil and a teaspoon of dish detergent mixed in 1 gallon of water and then sprayed on the plant.

Ya no secret at all you can find this same recipe at about 200 internet sites and gardening videos. I mean that's where I got it :)

This particular Zuc plant is one I have growing against the side of my garden shed in an old water trough that has a hole in it (well several that I drilled into it too now). It gets a bit over 6 hours of direct Sunlight a day which is enough to make it produce and grow but apparently not enough to fully combat the humidity and the mildew right now.  I will take a picture of this thing every day for a bit to post and see if the mixture begins to help this plant.

One thing I have learned for my particular area of Missouri since the early days of this blog is not to be in any particular hurry with the planting. From the first of June I can count on about four and a half months until my first possible frost date of September and I rarely have seen one before October. Plenty of time to grow about anything and May is just too damned wet, cool and stormy here. I used to bust my backside to get my garden in by the first of May only to watch rain drown the entire thing for days on end and wind shred my new plants. Finally a couple years back I switched tactics and do not start actual gardening until my volunteer pole beans begin to sprout on their own. That is now my sign to BEGIN putting the garden together with new mulch, replacing ground cover and moving it if needed etc. I now use a combination of old metal roofing walk paths and landscaping tarps covered by thick hay mulch with pretty much everything possible trellised some how.

As the Summer progresses I will take more pictures and explain things a bit more in detail but I have adjusted things time and time again as new problems for every method shows it's ugly head. I first tried the Eden method and became a breeding ground for bindweeds, morning glories of every color and variety and rhizome grasses. I then switched to grass clippings with great success for about a month and a half until all the weeds would attack at once through the mulch. I tried sheep wool. That was interesting until every dog in the county decided to roll themselves up in the loose wool like canine burritos and sleep on my plants. That is when I switched to a hard ground cover and began covering the walk paths with old metal roofing and then covered them with hay.

Truth is I have so much hay available to me I cannot ever use too much. I did not have enough roofing pieces nor did I think it would work well for the entire garden so I began buying about 200 feet of landscaping tarp about every other year or so to switch the layout. This means I only need to change the positioning and layout of the garden every two to three years which then includes a new tilling and humus ground conditioning at the same time. Cut my work by 2/3rds as putting all that together was most of the work. I also placed the garden enclosed on all four sides by year round pasturage for the goats and sheep. They cannot get into my garden (unless I let them) but they eat right up too the fence and stick their heads through constantly. Goats and sheep it turns out LOVE bindweed and morning glory (at least the ones we get here) as they crop the grass and weeds around the garden down to the ground now. They have plenty of other pasture to use but the parts right around the garden is the closest to their shelters and so they nibble it down year round. This basically stopped all Bindweed, Morning Glory, Jonson grass, Bermuda Grass and other pest weeds. It does not stop Canada Thistle or Buffalo Grass as nothing will eat them.

Still it is the closest to 100% protection I have managed to get so far. It makes my garden look like a barren wasteland of old hay until the plants get big but it has been the most successful means I have found to date. I still mix in a good amount of grass clippings as I go and have no ground barrier over things like Potatoes and such but it works. I will post pictures and tidbits of the garden as things progress this Summer.

Posted by PioneerPreppy at 6:15 PM