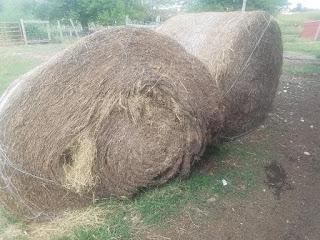 Here is a quick pic of the three year old hay bales that have been rotting in the back of my main hay field for three years now. As you can see the bottom few layers of the bale on the left have pretty much rotted away including the netting. The one on the right is still in pretty good shape believe it or not.

When these bales were done they were too heavy for my older and smaller tractors to lift and the guy who was suppose to get them (along with about 100 others) never came back for them. I moved and stacked all the others keeping about half of them inside but had to place the other half on higher ground to keep the rotting to a minimum. I kept em in case the guy ever wanted them and turned down several offers to buy them in the process. They were not mine to sell in my opinion and honestly hay was in such abundance I am not sure I could have even given them away at first.

At any rate arguments about abandonment and such aside the price of simple mixed grass hay for the last couple of years in bales this size isn't enough money for me to second guess a neighbor's intentions or circumstances. No sense making a possible enemy for something so small and trivial in my opinion, especially when it causes little to no problem for me personally regardless. It became obvious this last Winter and Spring the original guy who baled them had no interest in them and did not think they were worth his time any longer so I started using them for other purposes. 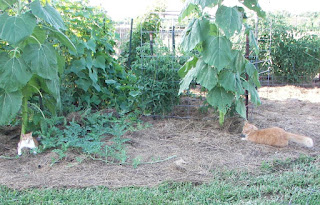 A few bales of course went to garden mulch. As usual the cats love a good mulched garden when the plants get high and thick enough for good cover and shade. All told I think I used two old bales and the remains of a couple half eaten bales left over from Winter in the garden this year.

These latest two bales will begin by becoming bedding in the sheep and goat areas. 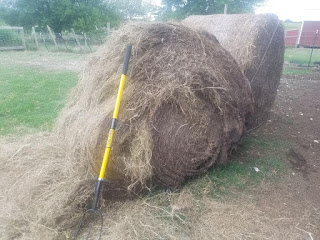 This is what remains of the left bale after cleaning out sheep stall number one and forking in a new layer of bedding. Really it is two stalls in size as I removed one wall and has it's own entrance so the sheep can use it when they want. They tend to use it more when it is hot of course or raining. I generally try and rake them all out with new bedding forked in every month depending on their use of them.

Any hay left over from these two bales this week will then be spread over the new section of garden expansion I have planned for next year. Best to get it all ready to go over Fall and Winter though.

I have also managed to compost a bale and a half that is slowly breaking down for soil next Spring. I put about two wheel barrow loads of Sheep manure infused barn waste on the compost and added two loads to the new garden area as well from re-bedding this trip. Looking at the picture I see I did take a pretty sizeable chunk of that bale off already, now that is so dried out I am sure I can lift it.

I was surprised the hay inside was remarkably well preserved, so much so the sheep have been happily eating it from time to time. Mostly cause they are too lazy to walk into the pasture I imagine.

If the stored bales last another couple of years I will be well supplied with bedding, compost and garden mulch for quite some time.

Posted by PioneerPreppy at 4:26 PM