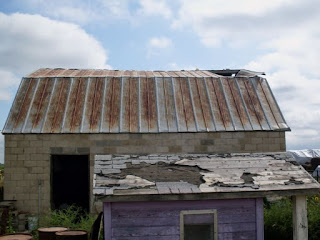 Thank the Lord my barn is in better shape than the one in the picture. I didn't use a picture of my own barn cause it is pretty distinctive around these parts but this gives the general idea. March brings with it the wind around here on the edge of the plains and wind doesn't mix well with old metal barn roofs. Dealing with roof panels is pretty much a routine yearly thing at the Small-Hold. I try to limit it as much as possible but the end result is I find several places I missed and therefore need to go back up there a few times before Spring is over. If you ignore even the smallest problem it can become a large one very quickly when dealing with old metal roof panels.

I can't really complain this year so far. All my repairs from last Summer have held well and even in 30+ MPH winds I don't hear any tell tale bangs or squeaks, Except for one panel. I had some nails loosening up on the Southeast corner that try as I might I could not get a good angle on to sink a roofing screw into last Summer so I tried just replacing the nails and it did not work which has resulted in about half the panel pulling up and flapping in the wind.

I can't let that go very long trust me.

Let me explain the roof a bit more. The Barn was supposedly built in the early 1920's out of oak that is now so hard you cannot drive a nail into it. The roof supports are a different wood of course but I can only assume it was one that had the old cross grain pattern for holding nails better. I am slowly attempting to replace the nails as they pull out with larger self tapping screws complete with rubberized washers but occasionally I still have to make an emergency repair with nails here and there. This time the nails failed again so I had to attack the problem with a shorter ladder from the ground to get the angle right. I got it screwed down so all is well but the seasonal roof watch is now on.

It is a 100% guarantee a new section will begin pulling up before the Spring storm season is over.

Our roof pitch is just low enough that I can walk the thing but I am finding it harder and harder to do for any length of time the older I get. I had to replace two panels a few years back but all that remain look to be in very good shape yet except for the nail pulling problem. Either I will eventually replace all the nails with screws or maybe just buy a new professional roof install someday. Who knows?

I do know one thing though. The Barn roof I had to work on as a kid was an 8 section Gambrel style and that was much more of a pain then the flat 30 degree pitch I have to deal with now. Of course now that I think on it though the Gambrel style didn't pull up as much either.

Posted by PioneerPreppy at 7:21 PM