And the Water Flows 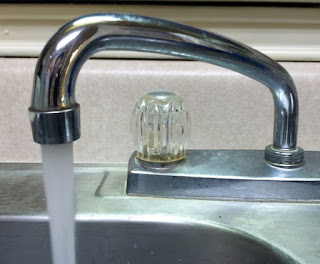 Everything is all back together and working properly once again. I had to chip out a 4x3x2 inch notch in the concrete foundation wall to get far enough below the cracks of the incoming water line to cut and splice in the new section of pipe. Otherwise the isolate, shut off and drain tactic I used a few years back worked to save all the other pipes in the house except the small section under the kitchen that I did not shut off soon enough. The end result was all the replacement parts came in under 20 bucks total. It could very well have been much worse.

Honestly this was a much needed wake up call for us. I should have listened to my prior experience and shut the North lines down as soon as negative temps were predicted. I did shut off the barn line but I should have also shut off the kitchen line too. Had I done that everything would have been fine I think. The last few years of milder cold fronts made me lazy and gave me a false sense of security. Going back over fixes I made almost a decade ago also confirmed that I should not have stretched things as far as I have. We should have been out of this old farm house five years ago but family issues and switching my main focus on fences, pastures and hay storage/production took my attention away from the house.

The foundation has obviously continued to shift as many of the cracks I fixed years ago have widened. By the looks of things it isn't going to last too many more years. I think the time has come to knock this old Frankenstein farm house down but that means dealing with government red tape and I am not fond of that at all. Around here there is only one form of county building regulation but it is so oppressive that it has stopped a number of potential home construction in it's tracks. That is septic regulations.

I have heard rumors that the over restrictive regulations I looked into almost 8 years ago have been reduced somewhat but I don't know that for a fact. I guess the first step is to get all that figured out once again. The second, and possibly most time consuming step, will be getting the Mrs. to agree and get moving. She is notoriously more stubborn and ill tempered about moving on things sometimes than an old donkey and the older I get the less I want to deal with that. Probably why I focus so much on the barn, pastures and out buildings as the only opinion that matters out there are mine LMAO. If she disagrees I simply hand her whatever tools I am using and tell her she can do it as she likes. That almost always works :)

Having said all that we are still not 100% finished with unloading all the stuff left behind from my Mother. I ahve an entire out building full of her old furniture and other assorted junk to deal with.

Still we more than managed to survive without piped in water for almost a week. The largest problem was of course keeping the livestock watered which we did by hauling snow as long as that lasted and then using the cistern water storage I got working almost a decade ago for just such an emergency. It wasn't ideal of course but it worked. Of course the snow hauling was cheating a bit since it relied on the water heaters to melt it once I put it in the troughs and we did take showers at my Dad's place.

Lots a decisions and directions yet to make. It never ends.

Posted by PioneerPreppy at 8:30 PM