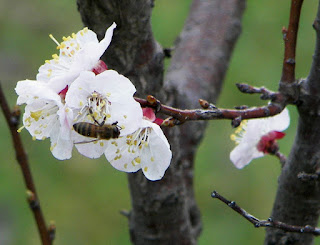 So apparently today was a real party day for the bees. I really can't tell you what all went on around here today because I was stuck at work all day. You see Saturday is shearing day so I can't work. I made a deal to work all day today so I could be off Saturday. The forecast said it was suppose to be cloudy all day and when I left this morning the fog was so thick you could cut it but by noon it had burned off nicely and it was mostly sunny out and in the 70's.

The Apricot trees are now in full bloom along with the ornamental pears and a few other types of lawn trees around. 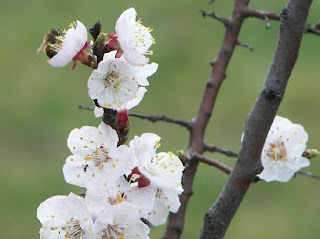 The Box Elder trees however also started opening their blooms today as well and that is always a happy time for the bees around here. The big one out in the yard was buzzing with so many bees I could hear it in my car with the window rolled down before I shut the engine off. 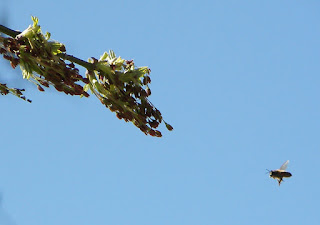 The Box Elder bloom this year is a full two weeks earlier than last year. So all of this is good news and nothing out of the ordinary even if it is a bit early. What has me perplexed is the one hive that I was sure was a dead out from Winter but hadn't got around to checking it yet.

We have had more than a few days that would have been fine to crack open the hive but none of them have really meshed with my schedule yet and I wasn't in any big hurry anyway since it was already dead.

However when I walked up on the hive this evening this is what I saw.... 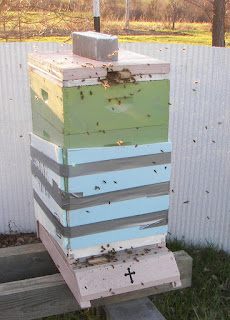 That's too many bees to be just robbers. Even if robbers had been hitting this hive they should have been long done with it before now. Either that hive has been playing possum all this time or that's the largest group of robbers I ever seen. They didn't act like robbers and I swear that hive was dead I have seen no activity out of it in weeks.

There is one other possibility however and the activity of the bees kinda suggested to me it might in fact be a swarm that moved in. If that's the case then it means swarm season has already started here and I have dropped the ball with getting my traps out.

This new development is going to need some exploration tomorrow when I have light and time to do so.

Posted by PioneerPreppy at 8:36 PM