A Winter Weather Fatality and Failure 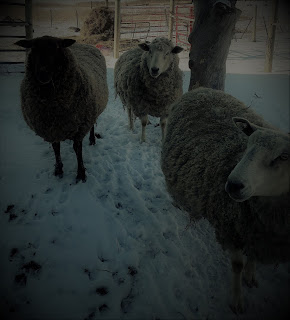 Alright let me start with an apology. Yes we did in fact have a death here at The Small-Hold but I seriously doubt it had anything to do with the Winter Freeze we been having. My adding that to the post title was really kinda misleading and click-baitish of me but I couldn't resist.

Tuesday night or early Wednesday morning we did in fact lose a ewe. One that has been around as long as I can remember and doesn't even have a birth entry in the records I have which go back 14 years at this point. What that means is she was one of the original purchase sheep my Mother bought around 15 or 16 years ago. That all makes sense as she was a cross breed of what looked like a Romney and Mini-Chauvet (sp?). Which was a cross that only happened once on this farm. She had a long history of producing many excellent lambs herself but was one of the few of her small breed that was kept. She also hasn't been bred in five years. She was one of the retired girls who had earned her pension. At any rate I noticed her not eating much back before this cold snap hit us and I been trying to feed her off by herself and babying her a bit for almost a month but she was just slowly getting weaker and weaker. The vet basically said there was no single illness that should be effecting her at this time of year like she was acting and he and I both knew at her age it was pointless to try much anyway. I put her in the barn nestled in hay Tuesday evening and that is where we found her Wednesday morning. Since she was at least 15 years old I am calling it simple old age at this point.

Finding a dead ewe turned out to be the least of my worries about Wednesday though. I left The Small-Hold before dawn just as the snow was starting to fall once again with the outside temp according to my car being -9. About half way to work I chose to keep going even though the snow was getting kinda heavy and I even said out loud I was probably going to regret it.

Regret it is an under statement.

Sure enough I hadn't been at work even two hours when Mrs. PP calls and tells me there is water spraying all over the basement. My son managed to find the main shut-off I had installed for the water but the other one I had shut off that went to the kitchen had failed somehow. I still don't know what happened if the shut-off was already froze when I shut it off or what but whatever it was it hadn't worked but had just been frozen not actually off. As the basement thawed out the break revealed itself.....

At the worst possible time it could pick.

By the time I got home the water was off but I had about 3 foot of water in the basement again that needed pumped out before I could see what was going on. It was then that I realized I had screwed up and NOT saved a hose. They were all frozen. Took me hours to get one ready and by that time I had other frozen areas from no water flow in the pipes. At that point I inspected the main pipe that comes in from the outside line and noticed a line of ice around it as well so we called the county water guys and had em turn us off at the outside main until it thaws enough for me to inspect the damage.

Luckily I still have the emergency cistern and hand pump available for getting water to the sheep and goats. Well when it isn't frozen solid anyway. I also plan on transporting 20 gallons or so from work each day too as they don't mind so as soon as it thaws enough I will need to once again start redoing my plumbing.

I can't complain much though this has been the first failure in my design in over a decade and it was bound to happen. The modular design with cut offs has served me well the real failure was my own laziness in not making sure the shut off worked this time.  Of course I still don't know the fullness of the damage I maybe singing a different tune next week.

Posted by PioneerPreppy at 8:05 PM