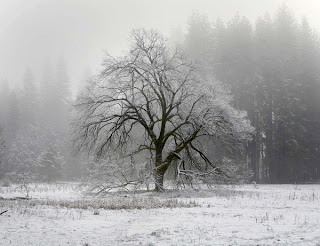 As we are able to get out and look around a bit now we at the Small-Hold and our neighbors are beginning to notice and address the damages this latest storm has wrought.

Just within a few miles of the Small-Hold the numbers of broken trees are beyond counting. One large limb in particular had an intimate encounter with a house down the road but in the area of tree damage it appears that we were really lucky. No small part of that is due to the large ice storms we had just a few years ago that caused some massive damage but thinned out the weak trees and limbs, a couple of years isn't quite long enough to build back up into a danger area in hardwood growth. In a way tree damage is kinda a blessing as it makes it easier to resupply firewood for next year.

The real damage has been to roofs and especially to outbuildings around the area. There are two houses in the nearby town that have some serious roof damage and may need to be torn down now. One in particular lost an addition roof that is sagging at least three foot down in the center now.

As I said this was one of the wettest snows I have ever encountered.

Less than a mile down the road from us another pole shed had the center roof collapse in a couple of feet and we had three support beams crack on a covered addition section of our barn. Not a huge concern as the section was pretty run down and had been built some time ago right up next to the barn with a pretty flat roof. As the snow melted off the barn it slid down onto this little addition and the weight cracked the supports. It will need replacing but it needed replacing anyway it was just pretty far down on my list of repairs to worry about.

Over the course of the last century as our population has migrated from a more rural life to urban dwelling with the rise of cheap energy we humans have lost a significant fear of Winter and her fury. I am old enough and my family never completely cut the rural life ties to the point that I can remember some of that fear.  I was also exposed to the stories and witnessed it actually at work in regards to my grandparents. My grandparents had a very healthy respect for Winter.

Winter even at a relatively mild latitude like we have here in Missouri was not something you scoffed at or complained about because it required a slight change in attire and elevated electricity bills. No, Winter was a time of loss and damage. A time of shortages and long periods of forced idleness interrupted by short periods of frantic effort before being forced inside once again to worry and stew. It was a time when the elements truly worked against you some days and a time when you were never really warm no matter how high the fires burned in the hearth.

Not to say Winter didn't have it's enjoyable aspects I am just pointing out that as a society we have by and large lost our respect for and fear of the dangers Winter can bring with it.

I suspect that as things continue to decline many of us will rediscover that respect and fear. Those that do not will pay the price.

Posted by PioneerPreppy at 1:37 PM