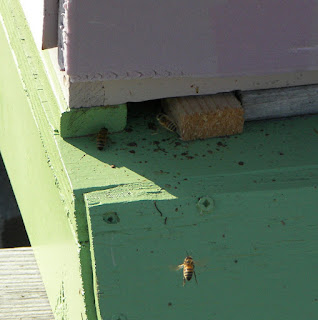 It turned into a pretty nice afternoon even if the morning was a bit cool. I went down and cut another trailer load plus of wood off the old oak and even remembered to bring along all the large flat rocks I had been collecting to put down in the mud gate along the way.

After cutting for a few hours I did a quick hive check and discovered I might have lost two hives this Winter. Now is about the time when hives seem to suddenly die off so it doesn't surprise me any. I don't think I lost any hives last year if I remember right so I am about due and one of the hives that now appears dead was a pretty old one too while the other kept spitting out swarms regardless how hard I tried to stop them last year. I need to open them up to be 100% sure but the lack of activity and no buzzing when I wrapped on the side of the hive is a pretty good test.

If all I lose are two hives a year though with almost 20 going into Winter I am happy.  I went ahead and started putting out my open feeders of sugar syrup though as I noticed I had a large number of foragers already hitting my Arizona tea can recycling bin. I need to design and build a rain cover for my feeding stations though before rain hits. 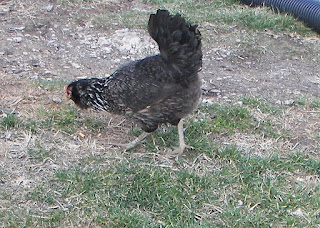 It seems that no matter where I go around the farm at least as long as I am within about 100 yards of the barn I cannot shake the chickens however.

Where ever I am, no matter what I am doing there is always at least one hen right under my feet. Many of them are not a bit phased by machinery running, huge logs almost squishing them or nothing. On the contrary as soon as I fire up the tractor or log splitter they are right there. I am beginning to wonder how next hay season is going to go now. 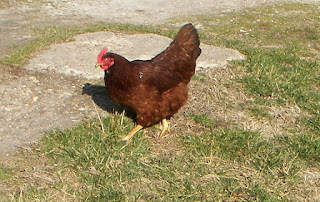 These two hens showed up while I was unloading the firewood from the trailer and cleaning out the wood stove.

By the time I started filling the open syrup feeders I had almost the entire flock up around me and they started digging out the mulch I had placed under and around the deck and hand pump to the cistern. 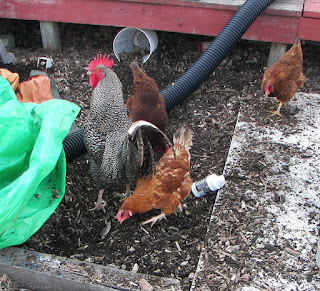 They knocked over a bunch of stuff off the deck as you can see. Moved the water spout hose I have directing the water out into the yard for Winter and began throwing all the mulch off unto the concrete pad I have covering the cistern. They even managed to scratch my wood pile tarp out as well.

These chickens are a menace. And they are everywhere!!!

I did see another sure sign of Spring today though in the form of a Red Winged Blackbird. I hope we start getting some real blooms soon for the bees sake.

Posted by PioneerPreppy at 5:11 PM