A Change of Plans Perhaps? 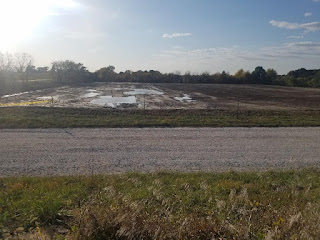 Anyone remember the above pic of the new large gravel parking lot and building foundation going in across from my little farm?

For about the last 2 or more months now there have been people over there pouring concrete and carrying on almost everyday but starting a few weeks back there is a whole new crew of a dozen dump trucks and the Lord only knows what else that shows up a few hours after night fall and begins doing all sorts of things. Sometimes they use big lights, sometimes just line up their trucks in a row with flood lights on em. Last two nights they have been doing something so loud that it shakes my house and drives the animals crazy. Last night my dog thought someone was knocking on my door...From 2AM until sometime after 4AM. 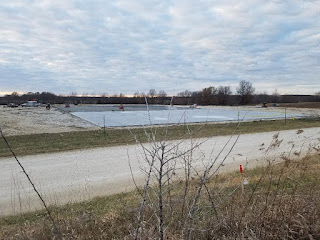 It looks to me like the foundation they had dug on the left was filled back in on three sides and they have now added to what they had and made a new foundation ditch which is about four times larger than the original. Now they have poured a slab in four parts. I still do not see any type of water trench or sewer but it is pretty clear that whatever they started building is not what they are planning on finishing.

This added with the sudden switch to middle of the night construction has me wondering if there isn't some shady switch-a-roo thing going on or they are trying to hide something. Seems strange but I have no clue if there is anyway to check on such a project in my county. Tell ya the truth this type of thing is not only totally outside my experience so is being this near to any type of construction this large regardless.

Also someone came over and cut along my fence to put out their little markers and ran into my corner post and snapped it off at ground level. I put a temporary t-post in it to keep it solid until Spring when I can replace it but it still kinda irks me a bit. Getting full dark out there now and I can already hear the night shift trucks coming in over there.

Posted by PioneerPreppy at 6:06 PM