Happy Forth of July!!! 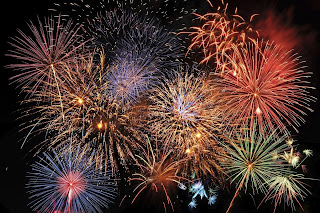 Another 4th of July!!! I hope you all have a happy one!! Seems like most of the celebrating out in my now semi-Rural part of the world went on Saturday and Sunday night which makes sense. I am pretty sure the explosions also kept the skunk and her babies holed up the last two nights too since I only had a brief glimpse of the mother last night about 1AM when I looked out a window, Haven't seen any babies since the last sighting.

I have spent the last few days strengthening defenses, deploying some repellents and moving some large items around inside the barn. The barn is now top on my repair, rearrange etc list anyway as it needs some serious love regardless. I actually started on the barn last Fall but picked up some illness in November that I never really recovered enough from to start again until garden preps were pressing in. With the grass and weeds now under better control and the garden fully in, it is time to get back to the barn anyway.

I saw this video being posted all over the usual spots I frequent this weekend....

This guy is 100 years old and I would not insult any man that age individually, especially not a Veteran. I might make a side comment about the Marine thing if I thought he had a sense of humor and would be able to see it for what it was and not misunderstand some good natured ribbing. I don't know what this gentleman's politics were but pretty obvious what they are now in a general way. However he is making a mistake that I feel must be pointed out to many people these days before they are forgotten, although common knowledge for most who probably read my ramblings here.

This guy maybe 100 years old but I started my life under the new rules guys his age made. How many times was I told by some retiring old fool that it was my responsibility to step aside so some "others" had a chance? It was always obvious none of these old guys gave up anything they ever got for those same "others" I was expected to stand aside for.

Why after all this time can they not see we now have the very state of being many from his time promoted? When a man willingly sacrifices his own son's future for the benefit of others you pretty much also sacrifice your best chance at keeping those same values and cultural norms continuing on. If you don't have a son yourself you still stand a better chance by promoting as close to a carbon copy of yourself as possible. If you don't then you only set the stage for a change you probably will not like in the future.

There is no passing the buck here for the remaining Greatest generation and early boomers, they were in charge during the 60's and early 70's and started this Utopia of Equity we now live under. Every generation who has come since, from the late Boomers on, have had to live under this yoke. The last few poor guys like Millennials and Y's or whatever are not even old enough to remember the end of the good times and I feel sorriest for them. They have been brainwashed and lectured so much they cannot even conceive of ideas like true freedom and a level playing field. They must be subservient to their "privilege" and stand aside for all "Others".

I have always attempted to not only be an advocate for men younger than myself but to also attempt to put myself in their shoes and see how these new circumstances would effect them differently than myself. I have tried to instill a picture of how things once were when it was different and not just rant about how things have changed. I notice the older I get the more these verbal drawings of the past do nothing but get me labeled were I used to see some actual understanding.

I guess my memories are now getting too old to matter at the moment but that too is about to change I think.

One thing has kept me going and that is the total belief that the madness and fallacy of Equality and Equity will eventually destroy itself under it's own weight of success and misunderstanding of reality. As we enter another Femocrat managed Recession that looks worse than anything I have witnessed before with my own eyes I know I was right.

Posted by PioneerPreppy at 1:48 PM