More Hay for the Grind 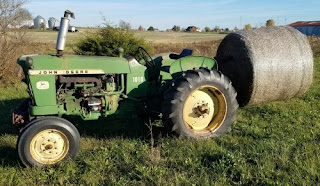 Spent the afternoon shuffling equipment around and bringing more old hay up for mulch/composting/bedding. Some of my round bales are beginning to get quite old. I still have about half a dozen bales that are approaching 4 years this season. Funny thing is I pulled two of those old bales out this Winter to use as bedding when we had a couple of days of sub-zero temps forecast and only used maybe a quarter of each bale. I went ahead and left em by the barns figuring I would compost em later and the sheep attacked them like parinah. Ate those older bales down faster than I have ever seen em do with same year hay.

I still have not figured out if they just like old hay more, if that was a particularly tasty hay vintage year or if it was just too convenient due to the cold temps for them to travel to the better bales out in the side fields. Normally my remaining sheep seem to be happy in single digit and below temps so I doubt the cold really was an issue but they are getting old so maybe they like it a bit warmer now. Anyway they devoured those old bales.

Recently I blew out one of the front tires on my 8N. I can't complain much since it was an original 1948 tire. Man they don't make fake rubber these days like the real stuff was back then. So I had to switch the brush hog from the 8N to the JD and remove the bale spike of course. While waiting on a new tire somehow the fuel bowl on the 8N decided it was time to get iffy as well so to make a long story short I replaced it, changed the oil etc. and what should have taken maybe a week with shipping time turned into about two and half weeks.

During that time I tilled a bit and brush hogged with the JD. Brush hogging with the JD felt weird too. Now that the 8N is back up and running it was time to switch things back around and bring some more old hay up to the garden area for composting and mulch use with the JD.

Before anyone asks my 861 Ford Diesel is currently in pieces as I am attempting to restore it once again. The work is very slow. I might finish it up in my lifetime...Maybe. Until then I do everything with the 8N and the JD.

Once I compost and use up the last six bales of 4 year old hay I then have 28 bales of 3 year old to use, 8 bales of 2 year old and only 2 bales of 1 year old hay. Maybe I will just unload all of this years hay for a change.

Posted by PioneerPreppy at 11:27 PM