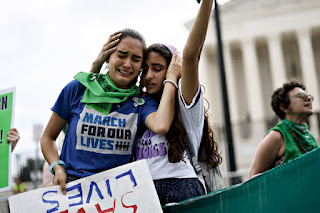 I know no one will find it surprising but I am so done with Feminist and liberal Femocrats now I can honestly see myself completely ignoring any amount of suffering they find themselves in. I maybe over reacting and of course I have been known to soften due to circumstances and age myself but what I have been seeing over the last few days has turned me so far away from these types at the moment I know right now I will not ever change my mind.

It is no secret I have never been a fan and have always been a staunch anti-Feminist and very pro-Male as well. Yet it is rare I join an anti-Abortion discussion. No one on either side cares what my personal views are, to go further than I do would mean committing other crimes and sins as well while doing so but the hysteria, lies and politicization of abortion has finally driven me to the end of my rope. I have seen it used to turn the White Female vote against so many good candidates over the years it now stands at one of the top reasons we are finding ourselves in the mess we are now in.

We are facing many crisis of Biblical proportions right in the face. Another world war, mass famine, an end to the age of cheap energy and easy credit just to name a few and yet thousands of these selfish (I don't even have words to describe them) feminist will destroy everything and everyone around them just to do what? Have a choice about killing unborn babies? Remove some guilt or something by making sure other Women make the same bad choices? I guess numbers do make better company.

In this day and age they have a choice. Just don't get pregnant.

And I really do not care how much they want to place blame on sweet talking Men or whatever scenario they can imagine....

No one has such luxuries anymore now and won't in the future for a while I imagine. We don't have time for it, we don't have the resources for it, and we have bigger problems to worry about than something that can so easily be fixed, stopped, taken care of or however you want to describe it.

You want to imagine force, trickery, bad math or whatever else for it being an issue? Well plan to reduce or remove the chances of those situations as well. I got a little hint for you, your gonna need those skills before all the real calamities we are in for are over anyway I imagine. Plus will probably have to teach em to the next generation of Women as well. So start practicing them now. Preparing for it is no different than making sure you have a stable food source going forward. Women were doing it for thousands of years before 1972 and while I have sympathy for such problems I am also realistic that it is not a problem that can be fixed or removed in a grid down situation so making things worse for a little bit more time is pointless right now and dangerous to be honest.

The abortion issue has split American voting down the middle by gender lines and has caused the election of thousands of politicians who have no business being anywhere near government decision making. Anyone who is moved to support Femocrats and abortion under the current circumstances is too short sighted to deserve to survive what is coming. I don't say this on a moral, religious or whatever ground I say it as a matter of pure survival.

Posted by PioneerPreppy at 2:09 AM