Nature Will Provide if You're Ready 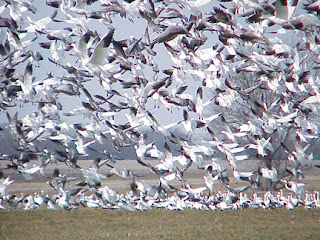 While all this snow cover and cold weather has not been the best set of circumstances for over Wintering reduced Bee colonies or been particularly helpful in the late Winter brush clearing and clean up I had hoped to get started on, there has in fact been a potential upside.

Had this been a true survival or long term grid down situation this weather pattern did deliver one resource right into our laps that would have greatly eased Winter's lean times in the form of thousands and thousands of Geese.

Even AP did a story on the Goose population today.

Surrounded as the Small-Hold is by agricultural fields, stock ponds beyond count and good sized rivers and streams we are in prime Winter goose territory. Point of fact I could simply set up a blind and relax in it for an afternoon and more than likely bag a week or more worth of goose protein just from picking off the low flying flocks as they pass over the house within any given hour or two. It only takes a few shots to empty the nearby skies but there are so many geese flying around that within a few hours new flocks come in to begin the action all over again totally oblivious to the fact that shooting had taken place before they arrived.

I am not simply speaking on theory here either as I have in fact participated in many a flyover hunt from my field in years gone by. I stood out in the yard Sunday and watched as the neighbor boys picked off three Blue geese from a crowd of hundreds that had landed in a stock pond not 30 yards from my fence line. They managed to only wound one of the three and had to cross over the fence into my pasture to run it down. Had they not went after it I would have had to have gone down there myself and finished it off then taken it to them.

Don't get me wrong I love roasted goose I am just not all that keen on killing and cleaning one when I don't have to. I watched them track the wounded Blue to a thicket it had ran into and heard the crack of their 20 ga. as they finished it off. The other 900+ Blues and Snows took flight, passed not even 20 yards over my head and landed in a stubble-field at most 200 yards away from where I stood.

Every Winter we get large flocks of over Wintering Canada's that come around almost every day but for a few weeks each year, once in early Winter and once in late Winter we get thousands and thousands of Blues, Snows, Brants and other so called White Geese and if you are prepared and needed the resource you could stock up on literally hundreds of geese in just a few days.

You just have to be ready for it and able to take advantage of the situation when it arrives.

Maybe a small smoke house would be a good project to work on this year?